At the WMF in Cernobbio, experts from all over the world discussed how manufacturing will change with the horizon drawn by industry 4.0, and what skills and professions will be needed to operate according to the new production paradigm. Here is what the Italian political and business institutions have implemented to help companies.

I had the opportunity and the chance to take part in the proceedings of the World Manufacturing Forum, the international meeting where every year we ponder on the state of the art of manufacturing, organized by the industrial chapter of the WMF of Davos. In the two-days of proceedings the heads of various Ministries with competencies and responsibilities for the drafting of laws concerning research and development got together around the discussion table. The manufacturing paradigm at the centre of the discussion on the definition of strategic directions and related incentives was clearly the digitalization of manufacturing, tat in Europe has taken the name of Industry 4.0. What are the Ministries that intervened doing, what does the EU think, what is the state of the art of the implementation the new disruptive paradigm in the various production systems? This was what was at the centre debate, as well as the interesting idea of human cohabitation within increasingly automated systems. The speakers, in fact, repeatedly emphasized this: man is and remains at the center of the matter, his skills will change but the machines cannot and will not replace the human contribution to the decisions on the effectiveness of production, impacting decisively on the efficiency “variable” of the new production chains.

The World Manufacturing Forum, an industrial-technological pendant of the celebrated World Economic Forum, is an open platform aimed at enhancing and disseminating industrial culture throughout the world. Organized by Confindustria Lombardia, the Milan Polytechnic and Intelligent Manufacturing System, with the support of the European Commission and Regione Lombardia, a high-profile international meeting was created, which took place on September 27 and 28 at Villa Erba, Cernobbio (CO). As of this year it has become a permanent seat for the Forum as a tribute – as explained by the president of the World Manufacturing Foundation Alberto Ribolla during the opening of the proceedings – to the age-old manufacturing vocation of Italy and a Lombardy that features as one of the “four engines of Europe”. Attended by around 900 operators from 40 countries, representing large and small-medium enterprises as well as academia, the congress brought to light the economic, social and technological challenges that feature in the manufacturing sector. And, for the occasion, it presented the first WMF Report, which defines global priorities and trends, and identifies the recommendations to be addressed to governments and policy makers (by activating the QRCode here, the complete document can be accessed). This year the title of the meeting was “Manufacturing revolution to promote global resilience” with, of course, industry 4.0 in the foreground. Thirty the Italian speakers out of a total of 45, representatives of concerns (Leonardo Spa, Dompé, STMicroelectronics, Lavazza …) political institutions (the Italian ministries of Economy, Finance and Development, Regione Lombardia …), universities (La Sapienza, Rome and the Milan Polytechnic which, in the person of Marco Taisch, took over the scientific direction of the Forum), the European Commission and of course Confindustria, with its president Vincenzo Boccia, together with the national and regional top management.

For “variable” and “flexible” efficiency we mean the opportunities opened up by the digitalisation of processes, starting from data processing, and in particular the possibility of producing last-minute or customized products at industrial costs (as in economies of scale). A fundamental role is played here by the skills and training of personnel with initiatives aimed at filling, in various ways, the skill mismatch or gap between the supply and demand for jobs. Digitization means knowing how to process data transforming it into information, programming machine operations, managing and programming network software etc … all competencies – as we see – that are absolutely human and humanoid, which will allow us to predict the warehouses, and the very same types of products, and to create organic networks in the supply chain. This is not about replacing man with the machine but changing the skills and therefore the competencies in a process that sees man as the network manager, the decision maker who has and will have more and more data available in real time: to historicize, predict and manage relations between production systems. In other words, a man with greater power – clearly emerges in the WMF talks – thanks to a different set of tools that will allow an absolutely disruptive production variability compared to the Fordist paradigm of the assembly line and its subsequent declinations. In Italy, this scenario was also the premise and the “background” of the excellent work done by Confindustria and the Italian Ministry of Economic Development, which over the past two years financed the hyper-depreciation at 250% for the purchase of machinery with characteristics consistent with the new production paradigm: connection, big data analysis, remote control, to cite only some features of the machines that open up to the digital revolution.

The concrete initiatives launched in Italy 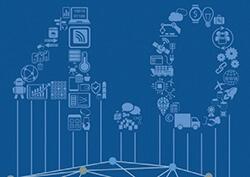 During the second year of funding and facilitations provided by the current DEF, some measures of tax exemption for company training were also introduced by the MiSE, precisely to create the skills necessary to effectively deal with the transformation process. Evident, in the background, the assumption of the unavoidability of change and the centrality of human work – not only in a purely human-centric and philosophical , but also pragmatic and productive sense. On the entrepreneurial side, Confindustria is also deeply committed to the capillary launching of the Digital Innovation Hub (DIH) and related competence centres, ie the territorial organizations t which companies can contact to find consultancy assistance and a supply network specifically for the organizational and production implementation of the paradigm. To this end, in collaboration with the Polytechnic of Milan and Assoconsult, Confindustria has also developed a cognitive survey on the state of the art. In addition, to create 4.0. benchmarks and business models, a National Association was created called Intelligent Factory, within which four so-called Faro Factories were identified, conceived as observation and network platforms for R&D. 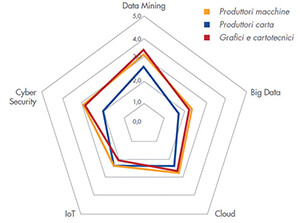 The Confindustrial institutions of our sector are particularly active in helping companies involved in change. To cite a key undertaking, the Paper and Graphics Federation has its own specific check-up, created in collaboration with SDA Bocconi, now available to all companies. To achieve this, the experts first identified all the tools for analysing the paradigm at European and Italian level; then they had them validated bottom-up by some entrepreneurs operating in the three reference segments: paper production; converters and printers; and producers of printing and converting technology. Each segment has its own medians within which, in anonymous form, the placements of all the responding companies have been included: They were as many as 108 against the approx 120 of the confederal check-up carried at national level, with a participation rate that testifies to the widespread awareness of the issues at stake. The Federation check-up led to the drafting of a brochure presented during Print4All 2018 in Milan and available to companies who wanted to, and possibly implement, a valuable diagnostic tool to design a development path in the direction of 4.0. And not only that. The Paper and Graphics Federation is working to create its own network of professionals who can provide training, consultancy and assistance to companies – associated and not – as a sector complement to the confederation’s DIHs. «As Ambassador of the project, I believe – and we have considered it at the level of the Federation General Council – that a specific activity on our supply chain, which accounts for more than 22 billion of associated activities equal to 1.4% of GDP, with the strategic and specific view of providing a support service to companies in this historic-productive moment of radical innovation, should dutifully be provided», underlines Carlo Emanuele Bona, councillor in the Federation and coordinator of the Scientific Committee that comes under the Industry 4.0 project. And he adds: «The companies of the Acimga, Assografici and Assocarta sectors can respond to the check-up until December 31 this year, thus obtaining orientative information necessary to understand the evolutionary and implementationary paths of the paradigm specific to their company reality» 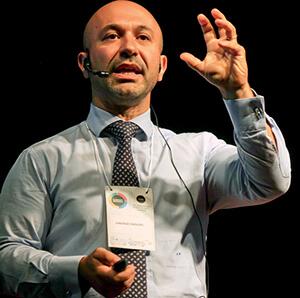 The profession of the future? Data scientist. Vincenzo Baglieri – SDA Associate Professor in Management practice at SDA Bocconi School of Management and coordinator of the staff who led the industry and industry level check up for the paper and graphics Federation – advises: “The point” is not the adopting of new technologies but the reconversion of skills.

Digitization has had a dramatic impact on the industry that revolves around paper and which is based mostly on traditional technologies. Above all it has been the last segment of the supply chain that deals with graphics and communication that has suffered. The paper and graphics Federation, which represents the segment under Confindustria, has asked SDA Bocconi School of Management to analyse the conditions for the adoption of digital technologies and to indicate the paths that need to be followed in order to embrace the principles of Industry 4.0.

Investing in digitization? Watch out for the processes

The SDA Operations and Technology Knowledge Group has therefore built a model to measure the “4.0 score” of a sample of 108 companies in the sector. According to the study, in which the Jeme students have contributed, over the last three years 70% of the companies in the sample have invested in the digitization of their industrial processes. With a shortcoming illustrated by Vincenzo Baglieri*, director of the research project: «Drawn on by the incentives of the Industry 4.0 plan, many companies have underestimated the need to redesign the processes and invest in new skills. With the result of digitizing often inefficient processes or not having the know-how to propose themselves on the market in an innovative fashion. It’s like owning a Formula 1 and driving it like a small car». The Italian Paper and Graphics Federation has embarked on a path of rapid support for these companies and now, with the collaboration of SDA Bocconi, is building a package of services to improve the processes and skills of its members. «The weakest processes, which would benefit most from the use of new technologies, in particular appear those of collaboration between company, customers and suppliers». «Industry 4.0 does not mean producing differently, but having control over every production phase, extracting data that enables processes to be improved. To do so there is a need for data scientists who know how to read, aggregate and interpret this data. It is easy to adopt a new technology, reconverting skills is a lot more difficult. This is indeed an epochal change, that makes collaboration between the university and the industrial system essential».