The post-Trump USA and the post-Brexit UK have been and will be major outlet areas for Italian printing and converting machinery manufacturers, who must, however, come to terms with radically changed contexts and rules. To help companies get their bearings, Acimga organized two webinars that took place on February 3 and 10, respectively, in collaboration with high-profile experts and analysts.

The USA and the pro-European thrusts

The first conference, dedicated to the U.S. market and held in collaboration with the ExportUSA New York Corp. consulting firm, looked at the development of the American economy in the Biden era and offered suggestions on the basic themes that exporters are facing: tax reform, investment opportunities, reference standards regarding mechanics, development of distribution in the sector, management of travelling personnel… We’re talking about the leading non-EU country for Italian exports in the sector, with a GDP 10 times larger than ours, and growth based on consumption (which indirectly creates imports). 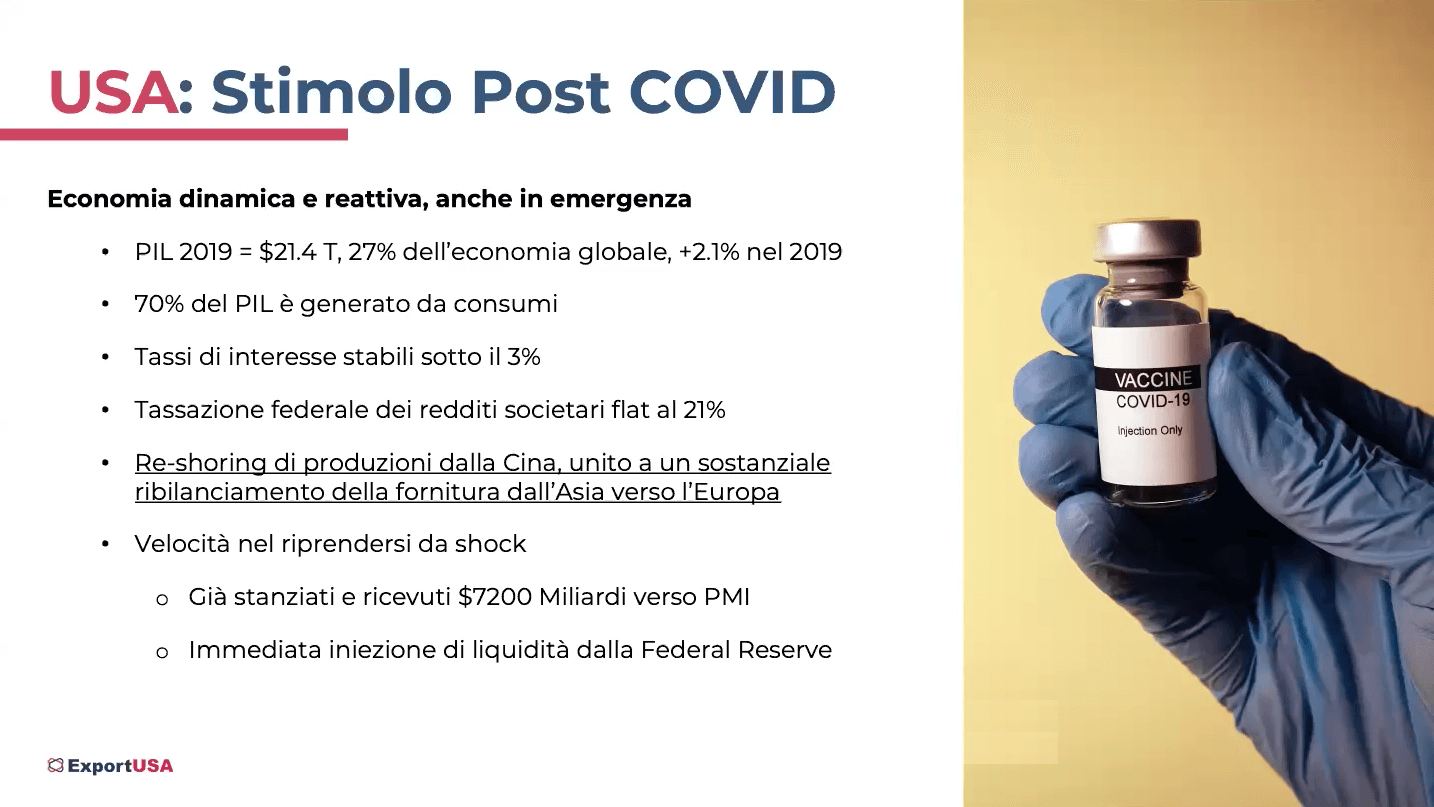 There are many changes initiated in recent months, mainly stimulated by the pandemic, which open up new and important business prospects: the reform of supply chains in favor of Europe to reduce dependence on the East, for example, or the renewed opening up of politics in favor of old European allies. But above all, and to a more lasting extent and independent of the orientations of individual governments, the enormous investments for the relaunch of the economy: 2000 billion already allocated and another 1900 billion on the way, to be allocated to two major strands of economic development: infrastructure and sustainability (which, as the speakers point out, also has an enormous value in terms of international policies, conditioning, for example, the supply of energy sources).

That reputation that damages us

In all this, we Italians have a lot of cards to play, underline the speakers, as our industries are more advanced than those of the United States, also in terms of digitalization 4.0, which allows to ensure services and connections at a distance. But, unfortunately, we still suffer from a real deficit of organization, and a bad reputation for poor reliability that still accompanies us and penalizes us. To the advantage of the Germans, our eternal competitors.

The second webinar, articulated in a session of economic data and in a series of technical-formative interventions on customs and tax issues, was conducted with the direct involvement of ITA (Italian Trade Agency). After a speech by Acimga Director Andrea Briganti, who outlined the positioning of the Italian graphic and converting machinery industry in the Anglo-Saxon market, speakers included the Director of the ITA London Office, Ferdinando Pastore, the Head of the Innovation and Capital Goods Desk, Filippo Mansani, and lawyer Gabriella Migliore, Head of the very popular Brexit Help Desk. The practical-regulatory session saw Fulvio Liberatore, customs consultant at Easy Frontier, and Michele Ammirati, accountant and managing director of Well Tax, taking turns to speak to the most specialized operators.

Italy-UK: the value of partnership

So much interest is due to the fact that the UK is the sixth largest economy in the world and the second largest in the European area, as well as a major business partner of Italy: trade between the two countries at the end of 2019 was 29.2 billion pounds (+1.70%) with a positive balance of 9.7 billion pounds, up +13%.

Narrowing the scope of observation to the printing and converting industry, despite the decline in all indicators between 2018 and 2019, UK remains the fifth largest producer of printed products in the world after the USA, China, Japan and Germany (Italy is in eighth place) with 8689 companies, more than 80 thousand workers and a turnover of 8.9 billion (these data, remember, are pre covid). In pole position are commercial and editorial printed products, which have obviously suffered the most from the pandemic, with a significant share of packaging and security printing, which has obviously gained positions over the last year. 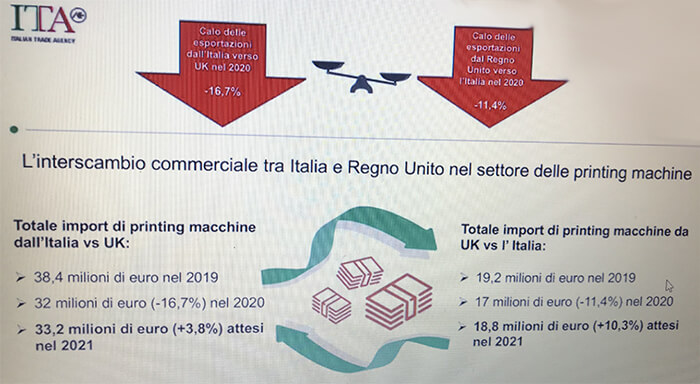 The expected slowdown of the economy due to the exit from the Union has not it seems occurred, even if the restoration of the borders produces slowdowns, more bureaucracy (also due to the still undersized staff) and all the doubts, confusion and dose of fake news that make life difficult for businesses.

The most effective testimony comes from Gabriella Migliore, head of ITA’s Brexit Help Desk, who tells of a table set up to offer information and which, over the course of the weeks, has become a real crisis unit, committed to solving countless problems, often created by the irresponsible attitudes of companies with respect to the required fulfilments, or the sharing of fake news that can generate fears and damage (listen only to the primary sources of information, Migliore recommends to companies).

A separate chapter concerns the movement of people, and Ammirati mentioned this. Now working in the UK will be more difficult: closed borders, European travelers used to enter and leave the UK without any restrictions are treated like other foreigners, with few facilities for those who already reside on the island. For all others, the management of immigration flows seems to be inspired by the Australian/United States and the “British first” principle. To be monitored carefully before making any plans to involve Italian personnel based on the other side of the Channel.

De Luca invests in bags and continues to grow

The successful experience of an ECG pioneer