While new dimensions of sociality are being explored in the unexplored territories of the Metaverse, the paradigm shift in B2B communication initiated in pandemic is producing ripe fruit. It is based on a “revolutionary” principle that has generated countless experiments and some resounding success stories. Like the multi-format and multi-channel one (with tens of thousands of followers) of Lombardi Converting.

In the B2B arena, before the pandemic, business communication proceeded on the well-oiled path of glossy advertising and marketing-designed content. Then came covid-19 and everything changed. All over the world, the priority of companies became to understand and share what was happening, inside and outside their perimeter.

This was the starting point for our conversation with Nicola Lombardi, marketing manager of the family-owned company, recorded at the newly opened Lombardi Studios to give a live demo of the latest “idea” of the Brescia-based manufacturer of flexo, narrow and midweb printing presses: setting up a real television studio where – with the support of images projected on mega-screens – they could interview guests who were called upon to share information and ideas with the ever-growing  audience of the company’s “followers”.

The lively inventiveness of the young multifaceted manager – classical studies, a degree in economics, a passion for cinema and science fiction – is based on a mix of imagination and pragmatism, which has produced innovation and brought to light how radically the elements of a communication have changed today: in order to be effective it must first of all be authentic.

The Studios are the last stage of a journey that began when we all became forced into the “remote”. Nicola recalls clearly: “At the beginning of the pandemic, when Italy was the first western country affected and the rest of the world looked at us astonished, customers and distributors called us from every corner to ask what was happening, if we were still alive, if the factory was working… The series of weekly live demos, which I have called Reboot, was designed to explain in an immediate and credible way that, despite the ongoing tragedy in terms of health, Lombardi was working and producing ‘as usual’. It was a message of positivity and hope, and the common thread was the demo of our machines, done by hand with the help of the cell phone to show live the various groups and components of interest. Were they naive shots? Yes, but that simplicity and directness were more effective than a thousand “studied” speeches, and they made our YouTube and Linkedin channels ‘explode’.” 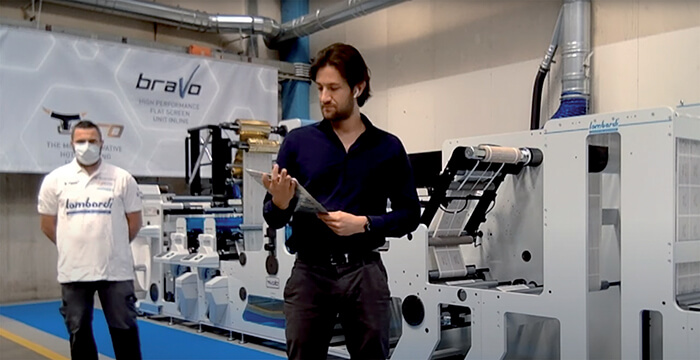 Flexoworld and the rediscovered community

Another point of no return for Lombardi’s communication was Flexoworld: a great “show” broadcast in live streaming last May, in 3 consecutive episodes at 2PM (“an appointment compatible with all time zones in the world, which allowed us to be followed simultaneously in all continents, just like in Reboot”, explains Nicola Lombardi). It shifted the focus from the company to the labeling community, bringing to the forefront, alongside Lombardi’s technology, stories and experiences of customers who have something to say, market insight from Italian and multinational suppliers, expert analysis… offering a variety of information that transcended the narrow scope of “advertising” while gluing thousands of “viewers” from around the world to the screen. 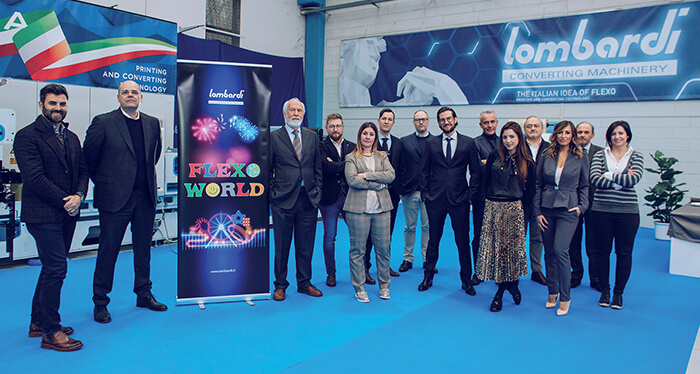 “I designed this Kolossal, as you called it, using far more means and technologies than Reboot, because with the passing of time we were all suffering more and more from the impossibility of meeting in large collective events, where you not only show up but also establish that dense network of relationships and exchange of information that only ‘n presence’ can develop. So I brought this world indoors – only for the interview with Etica did I move to Lazio – alternating the presentation of our solutions and market analysis with dialogues and interviews with the guests, to recreate the rhythm of real life. The enthusiasm of the people involved and the win-win success at co-marketing level confirmed the validity of the idea. As a ‘side effect’, it triggered the desire to participate on the part of foreign distributors, who relaunched Flexoworld in their respective countries, exponentially multiplying the number of views “.

The first fair and 16 thousand views 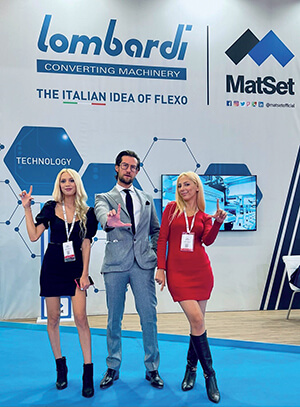 The first fair Lombardi attended as an exhibitor, with a stand without machines and all the trepidation of someone who gets out of jail with a discounted sentence, was the Eurasia Packaging 2021 in Istanbul in October. The happiness of meeting up again was immortalized in Nicola’s photo between two smiling booth attendants, with the fingers of their hands mimicking the L of Labeling. Posted on Linkedin, in a few hours it had travelled around the world, scoring  the monstrous figure of 16 thousand views.

“That image was so popular because it spontaneously expressed a feeling shared by everyone, which was above all the joy of living. The results in terms of notoriety have been much greater than expected: my face (and the company logo) has been on the cell phones of half the world and at the fair people greeted me as if we were friends. Drawing attention to myself, doing ‘the anchorman of flexo’, was not my goal, but it was fun and above all it allowed me to verify, data in hand, the effectiveness of the communication strategy built with the head and heart in the previous, long months of forced confinement. With a little help: having the same name (Lombardi) as the company I represent makes an immediate connection between image and brand, with a very powerful ‘marketing effect’.”

The Studios start waiting for Labelexpo

And now here we are in the Studios – set up in the new 800 square meter shed next to the original factory (the Brescia-based manufacturer is growing) – waiting to return to the fair, this time at Labelexpo where Lombardi promises new surprises (but no spoilers, the marketer recommends…).

The idea of the “TV studio” – says Nicola – came from thinking about how to untie the communication-show, which is so popular with those who make it and those who see it, from contingent events to create a stable format. “Some ideas were born chatting with our Spanish partners of Tecnocut and so the first guests were the business development and sales & marketing of the company in Barcelona. Protagonists of the beta interviews, they relaunched the video on their channels obtaining international visibility that they would never have imagined, immediately confirming the goodness of the format. And I’m very satisfied. The Studios offer endless possibilities to conduct meetings that are different every time. Like ours today, which I hope will offer a thought-provoking contribution on business communication, potentially stimulating for others as well”.