The Indian “subcontinent”: the import of printing and converting machines

Thanks to the collaboration between Studia.Bo and Acimga, which provides its member companies with a wide range of specialized relationships for products and outlet areas, the magazine Converting offers readers a selection of exclusive and up-to-date market data and analysis, relating to the most interesting economies for export oriented companies. This time we focus on that immense and rapidly developing market that is India. 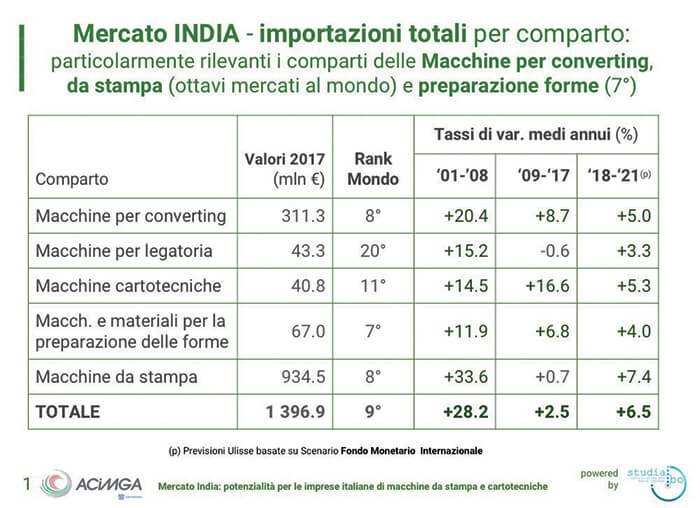 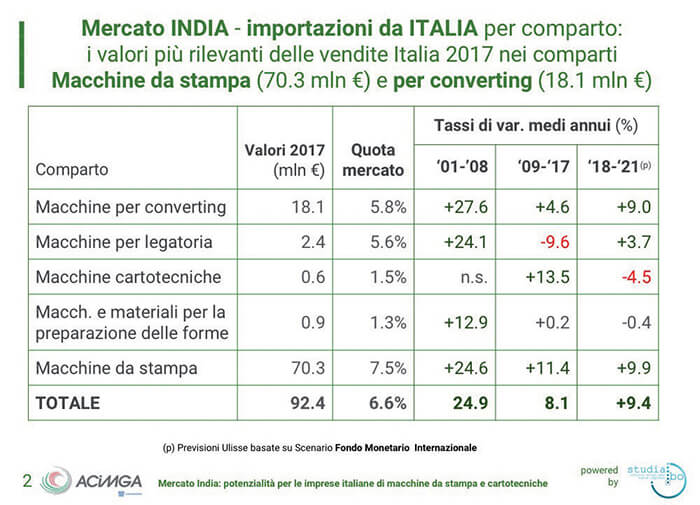 Italy is growing in the printing press segment

In terms of Indian imports, Italy plays a role that is anything but marginal (table 2): last year it provided more than 70 million euros of printing presses (with a market share of 7.5%) and for the next three years this figure is expected to grow at a rate of almost ten points per year (+ 9.9%, +30 million euros). In any case, these are percentages that are lower than in previous years: from 2001 to 2008, the year of the global economic crisis, Italian exports in this sector to India grew by about a quarter every year (+24.6). From the following year and until 2017, the rate of expansion contracted, being reduced to 11 percentage points. To date, Italy is India’s fifth largest supplier of printing presses and, according to estimates, in 2021 the country should be able to overtake the United States and gain the fourth position in the global ranking (with a 8.2% market share), behind Japan, Germany and China. Japan is confirmed as the largest exporter of the sector (269 million euros in 2017, a figure that should grow by more than fifty million euros by 2021), in particular in low price segments: it accounts for almost 30% of the market, though its figure should drop in the next three years. The shares of Germany, China and the United States are also down: a figure that, however, just like for Japan, should not translate into a reduction in turnover. Summing up, in 2021 the value of imports of printing presses in India should break through the billion-dollar limit (thanks to an annual growth rate of 7.4% from 2017, the highest among those considered), allowing Italy to increase the weight of its exports. 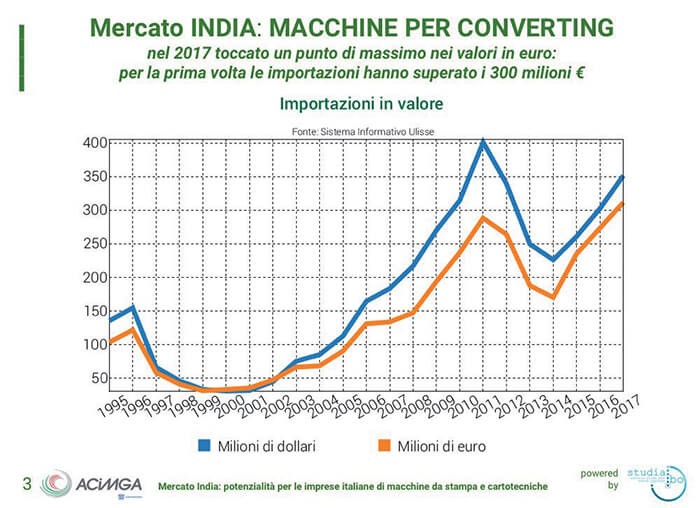 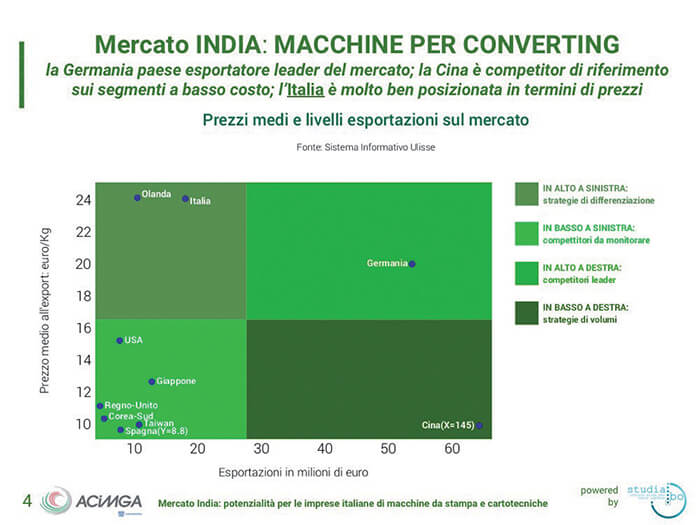 The role of the Belpaese in Indian converting

The other driving sector is that of converting machines: India is the eighth importer in the world (311.3 million euros in 2017). A figure reached with growth rates of over one fifth of the annual turnover between 2011 and 2008, that plunged in the subsequent nine years (+ 8.7%) and that are expected to contract further up to 2021 (+ 5%). Imports from Italy (which in 2017 make up 5.8% of the Indian market, for over 18 million euros) have undergone the same trend: heady growth up to 2008 (+ 27.6% per year) and a fierce slowdown until 2017 (+ 4.6% per year). But for the next three years Italian exports should manage to carve out some more space, with annual rates of increase of 9%: the turnover is expected to reach 25 and a half million euros. Italy is (and at least for the next three years should remain) the third largest exporter of converting machines to India. Germany remains the leading exporting country, China is the main competitor in the lowcost segments, while Italy manages to position itself well thanks to its prices and differentiation strategies. Lastly, between 2018 and 2021 estimates for Indian import of paper converting, bookbinding and mould preparation machines are positive (respectively + 5.3%, + 3.3% and + 4% per year starting from 2017): a growing demand to which Italy risks not being able to respond, with an expected annual decrease in the turnover of paper converting machines of 4.5%, limited to just under half a percentage point for the mould preparation sector. On the other hand, the exports of bookbinding machines show growth (+ 3.7% a year). 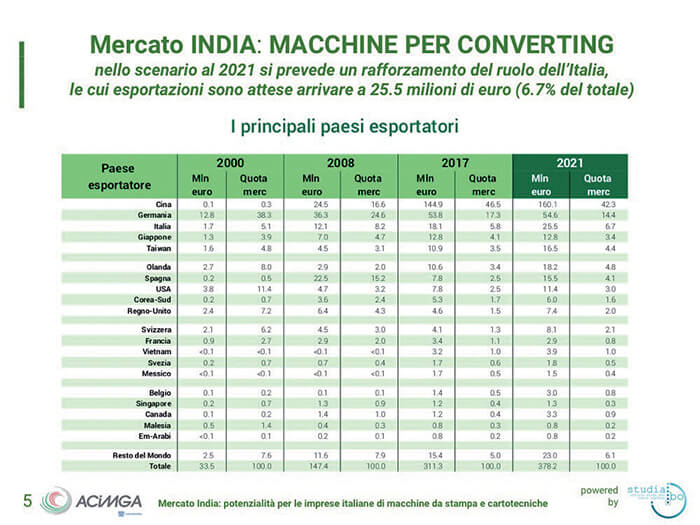 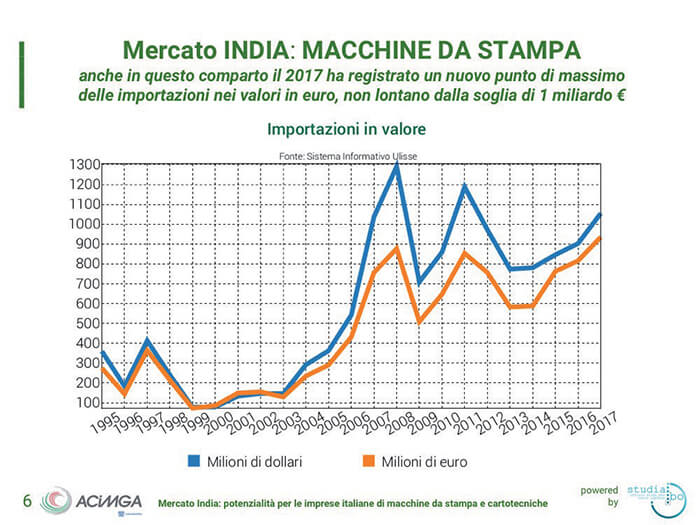 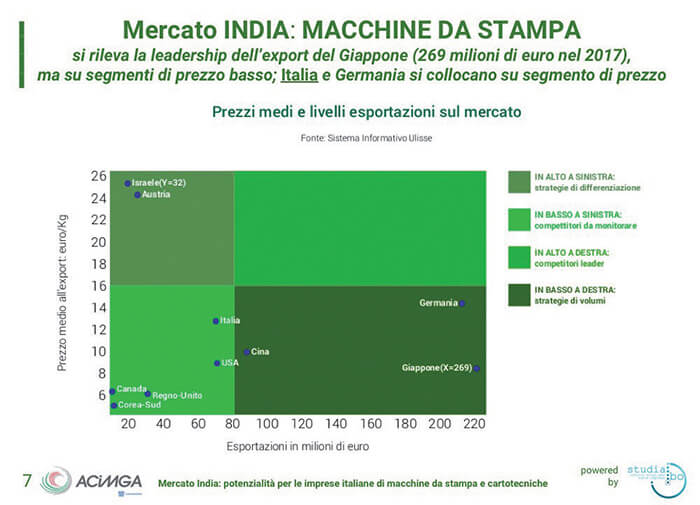 The supply chain at a conference with politics and finance

SAM: the Korean way to converting