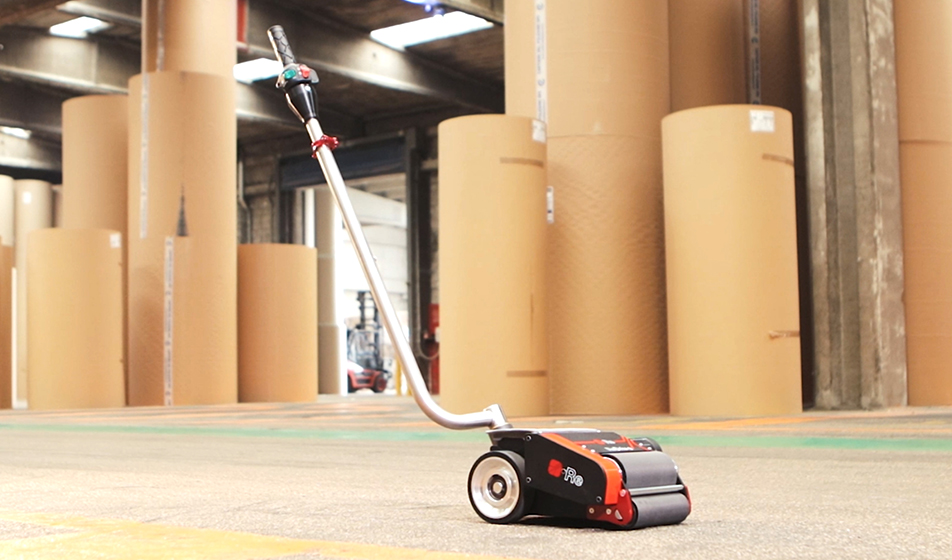 Until recently, the only way to move large rolls of paper was by using a forklift truck or, worse still, by hand. Using a forklift truck to move large, heavy rolls presents a number of drawbacks, related to limited space for manoeuvre, the presence of fragile components on board the machine and the risks to the operators. Alternatively, moving such loads by hand is not only hard work but also hazardous, bearing in mind the potential for accidents, both small and large, when pushing rolls that may weigh up to several tonnes. In view of the above, the fact that the use of roll mover systems has become so widespread so rapidly is of little surprise, given their capacity to reduce such risks to a minimum and simplify the work of the operators.

However, it would be wrong to suggest that the roll movers available to date represent the definitive solution to the above issues. Setting aside pneumatic devices, which are limited by their obvious need to be connected to a compressed air supply, operators are already well aware of the defects and restrictions of the most widely used battery operated roll movers. In addition to their lack of manageability, in order to guarantee sufficient power levels, it is necessary to increase their weight significantly. But that is not all: the main disadvantage of electrically operated devices is represented by the limited duration of the batteries. In fact, it is not uncommon to find such devices with a flat battery, while the back-up battery is also totally or partially discharged, meaning that the roll mover is temporarily out of service.

“In response to the problems encountered by the companies in this sector, we decided to develop a complete roll mover system, named ReDrive, capable of overcoming the drawbacks inherent to the devices currently available on the market” explains Giuseppe Romani, Technical Manager at Re, the Italian company that markets its devices for the automation of laminated product processing applications in over 40 different countries.

How was the ReDrive roll mover born? “First of all, we concentrated on the battery, designing a lithium accumulator with improved autonomy, capable of guaranteeing the speed and thrust necessary for a variety of operations.” explained Romani. After selecting a high performance plug&play battery, the Re engineers concentrated on the internal geometry, optimising the position of the rollers and wheels. “Each millimetre gained enabled us to reduce the torque necessary to move the same load by 7%, with respect to our competitors’ solutions. Thanks to this, we were able to use smaller motors with reduced power consumption, which all contributed towards boosting battery autonomy, while also reducing stress and strain on the mechanical components”. Another important feature is the stand-by function, thanks to which ReDrive switches automatically to energy saving mode when not in use, to avoid unnecessary power consumption.

The second challenge was to improve the manoeuvrability of ReDrive. “We are aware that it is often necessary to move paper rolls in spaces where there is little room for manoeuvre, and that industrial flooring is often uneven due to the presence of the tracks for the roll holder carriages.” explains Romani. “The first problem is no longer an issue due to the reduced dimensions and agility of ReDrive, while we have overcome the second thanks to the XL rear wheels, which take the most uneven pavements in their stride”. Other strong points of ReDrive include its solid build, guaranteed by the use of thick, welded sheet metal plates, and the option of three different handles: straight, rotating or reversible, depending on requirements.

“ReDrive is the result of a thorough analysis of the weaknesses of the existing roll mover systems” underlines Romani, who adds that “following the test phase and the initial responses of our customers, we are confident that our ReDrive roll mover stands out from the field in terms of battery autonomy, manoeuvrability and resistance, while conforming fully with the stringent new safety protocols and the requirements of the companies in the sector”.

Registration to the Print4All Conference is now open

Internationalization: Made by Italy in Thailand and Russia