The world is anxiously following the development of political and military events in Ukraine, which, in addition to those generated by the pandemic, foresee new and no less challenging changes. In this very uncertain scenario, companies are showing a truly extraordinary ability to adapt and plan, thanks in part to the forced training of the last two years, which has generated new analysis and management skills. An example of this is the two-voices interview Federico Baccolini (Renogroup) and Alessandro Tommasini (Tecnocarta / Gifasp).

In an interview in “episodes”, Federico Baccolini, Managing Director of Renogroup, explains what the crisis is. Chronicles of a paper converting company that supplies cartons and leaflets for pharma. 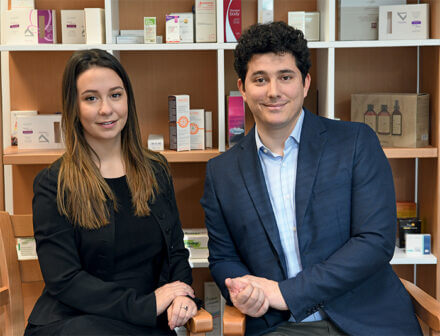 Prices of materials up 15-20% in the first two weeks of January compared to the previous month (+100% in a year); daily variations in the price lists of paper mills; deliveries now at 5-6 months; limited quantities. Not to mention the doubling (for the time being) of energy costs and production slowdowns caused by covid absences and, further complicating the picture, the surge of a crisis that in the fall seemed to be normalizing… but it hasn’t.

At the beginning of 2022, the reports from paper and cardboard converters read like a war bulletin. Federico Baccolini, a third-generation entrepreneur at the helm of Renogroup together with his sister Francesca, reconstructs the development of the company to explain how it is possible to produce cartons without cardboard and serve the pharma companies that risk having more products than packages. From the 4 parts of the complete interview (visible here) we extrapolate some salient passages.

The figures of the crisis

Compared to December, in the first 20 days of January we have recorded an average increase of 15-20% in the price of materials […] Recycled cardboard has seen the biggest increases, but also GC1-GC2 and pure cellulose have seen increases of over 40-50 or even 60%.

The real emergency concerns the availability of materials and the related issue of delivery times. The standard board ordered at the beginning of 2022 will be shipped to us by the end of May. And quantities are capped.

Price fluctuations have become a daily occurrence, so much so that paper mills have suspended their price lists and, before delivering the order, they set the price: take it or leave it.

In pharma, changing supplier is complex, and for an accredited supplier the greatest danger is not losing a customer. It is more problematic to satisfy new requests: if not the carton you have to give up job and development opportunities.

The e-leaflet is, for some time now, an alternative to the paper instruction leaflet but it is a passage that must be prepared and involves the modus operandi of the pharmaceutical company at many levels.

In this extraordinary situation there is an intense exchange of information, sensations, rumors from the various segments of the supply chain and the market in general. Networking is even more valuable.

With the multiplication of customer problems, our Ideas Lab has been working hard. In the last 3 months we have recorded the highest percentage of new product development in our history.

This crisis has led us to review the company’s structure and organization. Among the priorities, the revision of the logics and supply flows, with a view to greater efficiency and speed. New investments in know-how and facilities to enhance services are also planned.

The shortage of raw materials leads to the  restructuring of the supply chains, with an expansion of the number of suppliers and a return to territoriality. Even in the big pharma multinationals.

2 – The reasons of the crysis

Alessandro Tomassini, owner of Tecnocarta and current president of Gifasp, discusses the situation – difficult to say the least – described by Federico Baccolini in the previous interview. With direct attention to the situation of paper mills, material flows and the advantage of being part of an entrepreneurial association.

Tomassini jokes at the end of this interview: that he finds himself dealing with a demand deficit is “normal”, but a supply deficit like the current one has never been seen before. If we survive this challenge, nothing more will seem impossible. This is a joke, but the situation is really difficult, almost surreal, and explaining it is really “an undertaking”. We would like to thank Tomassini, entrepreneur and president of the Italian folding carton manufacturers group, for having reasoned with us.

Alessandro Tomassini, third from left, at Gifasp conference in Venice.

There is not enough cardboard, is it the fault of paper mills?

“The current shortage of paper and cardboard is the result of many concomitant causes, not all of which are yet clear,” says Tomassini. “Certainly it is not credible the theory of speculation on the part of paper mills, which would be comfortable profiting from the price rises caused by the lack of supply, which they would have no interest in increasing. Instead, I think that the price increases are due to the huge and objectively unmanageable increases in the cost of energy which, in that sector, generates ‘bills’ of millions of euros”.

The current scarcity of material, Alessandro Tomassini argues, derives from an insufficient production capacity on a global scale of both virgin fibre material and recycled baseboard. With two additional elements: “The first is that in recent years, as a result of the crisis in publishing and commercial printing, many paper and cardboard production lines have been closed. In some cases they have been converted to packaging board but are not yet definitively in production. Even if current conditions allowed it, setting up a new plant would require investments in the millions and no less than 5 years of work. And who can today make projects ranging from now to 5 years…”

The second factor aggravating the imbalance between the need for and availability of cellulose-based materials is the shift underway from plastic to paper, first and foremost in packaging. The preference that a growing number of operators, for well-known reasons and dynamics, give to materials considered more sustainable for the planet and society, increases demand. And here again, this is an irreversible trend, that hopefully will also strengthen …”

While the above analysis is consistent, other phenomena that contribute to the problem are difficult to explain. Like, for example, the scarcity of waste pulp.

“In Italy – explains Tomassini – the collection of post-consumer paper and cardboard is notoriously high and the material obtained from recycling has a low price. These would seem to be ideal conditions to mitigate the shortage of raw materials and calm the price increases. Instead, this is not the case: those who sell waste often find it much more convenient to sell it abroad, where there are buyers who pay higher prices. And it is not easy to understand how to intervene in these dynamics in order to protect a potential interest of the country (not exporting precious raw materials) without altering the balance of the market and free competition.”

If we look at all types of cellulosic base material, whether virgin or not, we see that there are countries in the world (China, for example) that are willing to pay much more than us to buy it from the big producing countries. Once again, therefore, we suffer here. “Also in this case – considers Tomassini – we are dealing with normal market dynamics, anything but incomprehensible; the problem is how to act to rebalance these dynamics, but here we enter the complex terrain of geopolitics, which plays on another scale and with other subjects”.

Gifasp: but what is the use of being a Group now?

n this situation, what can institutions like Gifasp (the Italian folding carton manufacturers’ group of Assografici) do to help their members face the emergency?

Tomassini is explicit: no one has a magic wand and not even Assografici and Federazione Carta e Grafica, who are working at various governmental tables, can provide miraculous recipes.

That said, the president emphasizes, Gifasp members can share on the one hand the macroeconomic analyses carried out by the Confindustria research offices, and on the other hand the opportunities for dialogue between suppliers and users of materials made possible by Assografici and the Federation. With very concrete benefits: “While we can’t pull the missing raw material out of the hat, we do have real-time access to information on what’s going on. In July, for example, the Gifasp conference in Venice provided us with useful elements to foresee what might have happened. And the most attentive operators didn’t waste any time, planning their purchasing policy with consequent, enormous competitive advantages”.