World premiere for the innovative DUALAM laminate-coating system, based on the Uteco machine and the DIC-Sun Chemical solvent free adhesive system.

On 2/12/2020, in two sessions after a few hours to facilitate the link from different countries around the world, Uteco in partnership with Sun Chemical presented the world premiere of DUALAM™ in streaming: a new laminating technology able to apply solventless adhesives with a semi-flexo system. This machine-material system is the result of the collaboration between Uteco, which developed the DUALAM laminating machine, DIC-Sun Chemical, which created the ad hoc adhesive, and Synaptik, which developed the in-line control systems able to guarantee the difficult result that is a constant adhesive coating’s in line control of weight of the two components, throughout the entire run and at different process speeds. The number 2 recurs, therefore, in many elements of this presentation: not only in the date of the event, but also in the two-component nature of the adhesive, in the two coating heads and in the two configurations of the machine, which in the live demo laminated a 12 Micron PET with a 20 micron LDPE first at 250 m/min and then at 500: the DUALAM machine is flexible enough to work also as “normal” solventliess, which uses a two-component standard and one-component high temperature adhesive, suitable for example for lamination of paper with film.

Many more than two though the advantages that DUALAM offers users, a point that was explained with clarity and rhythm during the demo carried out in the Uteco 4 plant in Colognola ai Colli (VR), followed by the Q&A session. The main actors of the event – Alessandro Bicego, Head of Product Innovation at Uteco, and Pierangelo Brambilla, Global Director Sun Chemical adhesives for laminating and cold seal, assisted by Simone Rossignoli, senior technician of Uteco’s coating and lamination department and active member of the Dualam development team and the machine “maneuverer” of during the live tests, and by the professional anchorman. 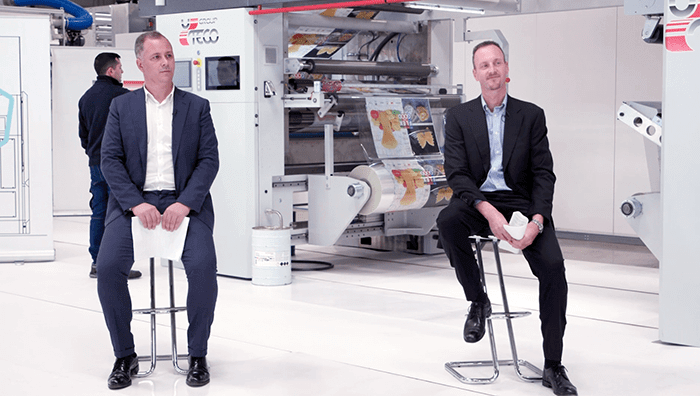 They can be summarized as follows: the DUALAM system produces laminated films for packaging of the highest quality and uniformity, at 500 m/minute, without the classic visual and functional flaws of solvent-free lamination. Crucial element is the speed of cross-linking of the adhesive, which provides in a few hours a laminate ready for delivery or for any subsequent processing. It comes with the two prerogatives that all processors want and must guarantee to the user, especially if they are a food company: an environmentally and economically sustainable packaging material, which respects all safety parameters to protect the health of the consumer.

Despite the high technology, DUALAM is a simple machine, comprising  two coating heads, a laminating unit, 2 unwinders and a winder.

Five rollers work in the solventless unit – two of which are motorized rollers in chrome-plated steel where the adhesive is dosed, and one rubberized and motorized which consists of a light and easy to handle sleeve that speeds up job changes. This 3-roller lamination group enables a very precise rolling point to be obtained while eliminating the classic defects of solventless lamination. 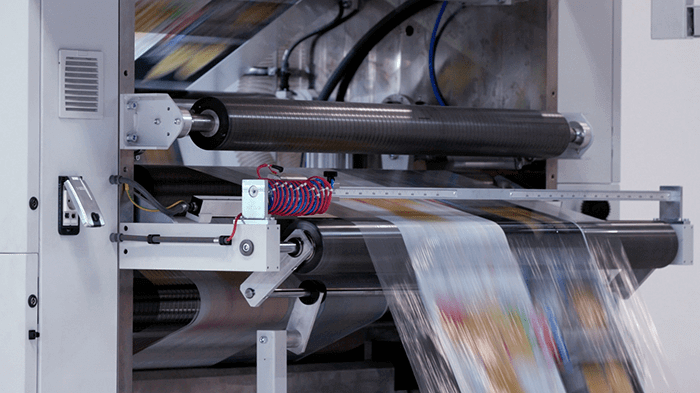 But the most important novelty is the semi-flexo unit, which adopts the Uteco Thermilox patent: Thermilox ensures very precise control of the adhesive’s weight of OH component throughout the entire print run. Speaking of coating weight control, it is once again worth mentioning the fundamental contribution of the inline IR thickness control provided by Synaptik.

The very quiet machine is equipped with an extremely fast start and stop ramp thanks to the very high sensitivity tension control systems.

On the Uteco machine operates the first two-component solventless adhesive of the DUALAM family, developed by DIC- Sun Chemical for this technology with two separate coating heads.

The products of the DUALAM family are characterized by the low viscosity of the two components, especially the one to be applied on the secondary semiflexo group. The cross-linking of the adhesive takes place immediately after the lamination and continues inside the coil, ensuring maximum mechanical performance in a very short time. This enables the speedy execution of any subsequent processing – such as cutting the reel or making a triplex laminate – ensuring a very fast time-to-market, with the known advantages for both the converter and the user of the laminate. Without overlooking the greater sustainability of an applied and effective low coating weight adhesive, nor the key aspect of consumer safety ensured by the rapid decay of primary aromatic amines.

Finally, a mention of the other aspects that contribute to ensuring the performance of DUALAM. The initial development of the cohesion of this product minimizes the troublesome problems characteristic of solvent-free adhesives, such as the phenomenon of telescoping, tunneling or channel deformation. Moreover, the high wettability, at any machine speed and print coverage, makes it comparable to a solvent based adhesive, especially when applied at a lowered coating rate (between 1.6 and 1.8 g/mq) ensuring the same high mechanical and thermal performance.

Registration to the Print4All Conference is now open